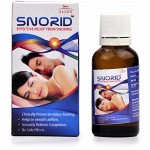 Take 10 to 15 Drops in 10 ml of water one hour before bedtime, and then again at bedtime. Increase or decrease dosage depending on the severity or as prescribed by the physician