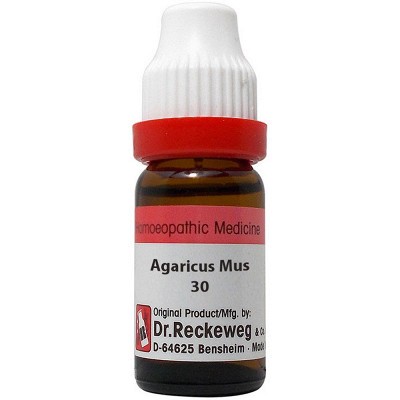 This poisonous mushroom, acts on CEREBRO-SPINAL Axis. Its action on brain produces more vertigo and delirium. Affection of spinal cord, nerves and medulla, produces IRREGULAR, ANGULAR, UNCERTAIN and AGGRAVATED MOVEMENTS; patient reaches too far, staggers or steps too high, drops things etc. Symptoms appear slowly. Patient suffers from MANY AND DIVERSE. symptoms. TREMBLING; TWITCHING; JERKINGS fibrillar spasms here and there are very marked, EYELIDS and tongue are specially affected. Symptoms appear diagonally as right arm and left leg. Shuddering. Nervousness and restlessness. Chorea better during sleep Sensation as if pierced by cold needles, or hot needles, a cold drop or cold weight on the parts. Painful twitching, then the parts become stiff and cold. In epilepsy and convulsions physical strength is increased, can lift heavy loads. Twitching cease during sleep. Convulsions after coition from suppressed milk; after being scolded; or punished. Young nervous hysterical married women who faint after coition. Children walk and talk late on account of brain complaints. Yawning before complaints. Incipient phthisis; is related to the tubercular diathesis, anaemia, chorea, twitching ceases during sleep. Various forms of neuralgia and spasmodic affections, and neurotic skin troubles are pictured in the symptomatology of this remedy. It corresponds to various forms of cerebral excitement rather than congestion. Thus, in delirium of fevers, alcoholism, etc. General paralysis. Sensitive to pressure and cold air. Violent bearing-down pains. Symptoms appear diagonally as right arm and left leg. Pains are accompanied by sensation of cold, numbness and tingling.